The Will to Respond: Arts and Culture Answer Back

Creativity is a broad-band term.

The artist does not have a will to respond to the ‘deepening political crisis in America.’ Sooner or later the artist is implicated or devoured by politics without even trying.

– Robert Smithson, “Art and the Political Whirlpool, or the Politics of Disgust,” Artforum, 1970

The University of Utah was a thriving center of creative activity during the 1970s. Visual art, music, dance, and more provided students with rich cultural experiences on campus and beyond which spoke to their unique contemporary perspective.

While Robert Smithson seldom made direct references to political and social issues in his writing, and even fewer appear in his best-known artwork, countless other artists made racial injustice, feminism, environmental decline, and controversial military campaigns the subject matter of their paintings, plays, poems, dances, films, and music. During the seventies, the Utah Museum of Fine Arts exhibited artwork on these themes and brought works into the collection that remains today as a testimonial to the tumultuous times. Click on the images below for a closer look.

Music also spoke to the fraught political issues of the day – or provided escape from them. Young people throughout the Salt Lake valley formed their own bands, enjoyed campus-sponsored dances and concerts with psychedelic light shows, and saw internationally recognized acts at the Terrace Ballroom, the Coliseum, and Lagoon. The variety of live acts rivaled that of the formidable record collection of Robert Smithson himself, which ran from Argentine tango to the Velvet Underground.

Dance reached an interdisciplinary zenith at the University of Utah in the 1970s as collaborations with students and faculty in architecture, photography, music, and even computer science flourished. Utah was the founding place for one of the oldest and most prominent dance companies in the United States, the Ririe-Woodbury Dance Company, and the University of Utah proved unique for pioneering what is now one of the nation's longest-standing dance programs in higher education in the nation. Arts and culture on the U’s campus couldn’t help but reflect the times – so long as creatives had the will to respond.

Signaling the rise of popular interest in traditional and folk music during the late 1960s and 1970s, the Utah Museum of Fine Arts brought this Irving Amen etching into its permanent collection the same year that Smithson completed Spiral Jetty. Many locally popular folk acts such as Utah Philips and Rosalie Sorrels were featured on campus and throughout Salt Lake City during this time and found fans well beyond the state's borders.

In 1968, Joplin was one of many significant artists to perform at the Lagoon amusement park in Farmington, Utah. Lagoon was among the important concert venues in the Intermountain region. Joplin appeared on the same stage as many of the locally popular bands, such as Holden Caulfield, also featured in this exhibit. Click on the gallery below for a closer look at some of the musical performances taking place in Utah during the early 1970s. 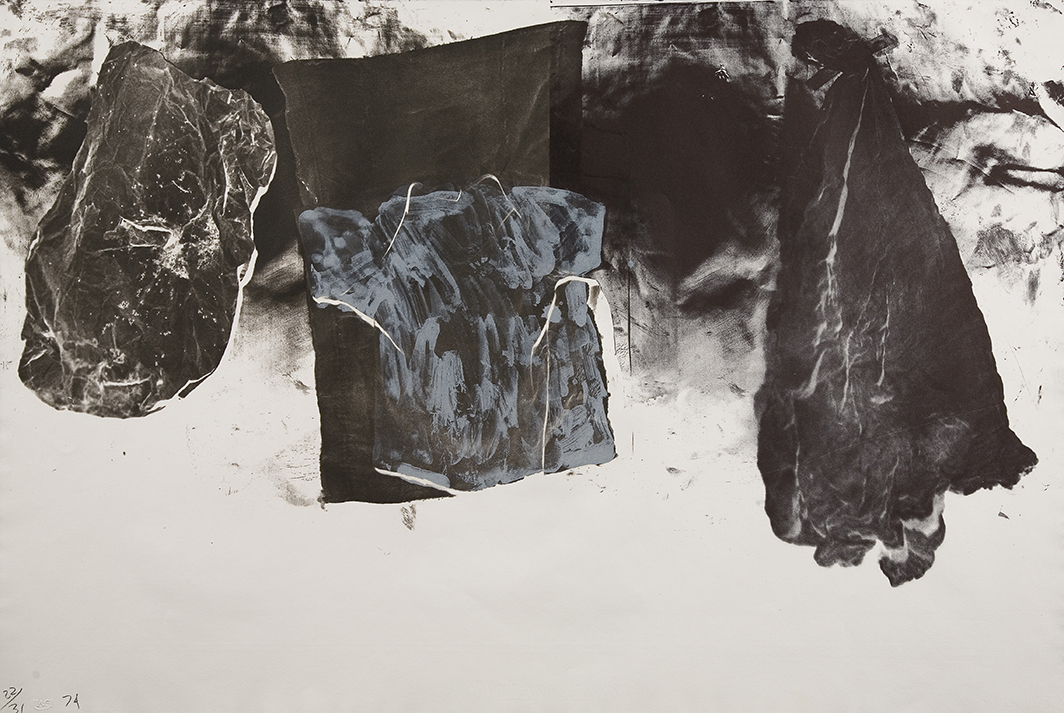 American artist Misch Kohn, deeply opposed to the Vietnam War, completed this work one year before he left a printmaking post in Chicago that he had held for more than twenty years. Kohn departed in protest after a colleague expressed unpopular political views and was forced to resign, reflecting the volatile atmosphere of campuses throughout the nation.

Why do you think times of hardship bring out the greatest creativity?

How are you expressing your feelings about life and events today?

What issue(s) make you want to use your loudest voice?

What kinds of artwork or ephemera will people look at 50 years from now that will tell stories about this moment? What will people in the future think about us?

Time Trip
Back to Main Menu

A Complex of Interlocking Forms: Campus Arts and Culture at the University of Utah

Going from Void to Void: Growing the UMFA

Utah on a Turning Globe: Campus of Discontents

The Will to Respond: Arts and Culture Answer Back